Georgia State was at a crossroads. After a 2-0 start, the Panthers fell in completely different yet similarly painful losses to Western Michigan and Texas State and sat at 2-2 going into their first bye week. Backs firmly against the wall, the Panther offense responded with a school record in total yards and rushing yards, putting together an all-time performance to down the Red Wolves of Arkansas State 52-38. For more on the good, the great and the needs improvement, this is Upon Further Review.

Perhaps the biggest harbinger of success in college football is putting points up early. Put simply, if you jump out to a big early lead, your win probability skyrockets. As it happens, Georgia State had struggled mightily in this regard heading into Saturday’s game. The Panthers were getting outscored 61-27 in 1st quarters and had not outscored any opponent in the 1st quarter in games 1-4. So the impact of the clinical opening drive – 12 plays, 75 yards, 5:19 off the clock – followed by consecutive stops on defense to start the game cannot be overstated. The score at the end of the 1st may have only been 7-0 GSU, but the yardage discrepancy told the real story – 159 for GSU, 24 for Arkansas State. It took until the 2nd quarter for Georgia State to really break the game open – mainly due to the nature of the long drives they were putting together – and it was 21-0 GSU after RB Seth Paige took it in from 7 yards out with 8:56 to go until the half. It was at this point that Arkansas State started to show the urgency it lacked out of the gates.

Much of the Red Wolves’ success in 2019 had been through the air, averaging 319 yards passing coming into the game. But because of Georgia State’s general inability to stop the run this year, the offensive gameplan for Arkansas State early was to try and set up the run. Once they dug themselves into a three-score hole, they pivoted to what had been working and threw it downfield to their playmakers at WR. The Red Wolves came roaring back and really started picking apart the Panthers secondary for the remainder of the game. It became clear as the game went on that the GSU cornerbacks couldn’t keep in front of Omar Bayless in man coverage and there were multiple busted zone coverages, including on the first Arkansas State TD of the day – a Layne Hatcher pass over the middle to WR Kirk Merritt in acres of space. Arkansas State started making it look easy on offense, racking up big chunk plays and fighting back into the game. What was once a 21-point game in favor of the Panthers went to the half 31-21 GSU – the Red Wolves riding a 9.1 yards per play average to cut into the lead despite being outgained by nearly 200 yards on the half (247 to 421).

After an offensive explosion in the 2nd quarter (45 points and 485 yards combined), both defenses clamped down, allowing just 7 points apiece in the 3rd quarter. And as the Panther lead remained the same, so too did two other key factors – time of possession and the offensive balance of Georgia State. Arkansas State were able to really find a rhythm in the passing game from the 2nd quarter on and the Panthers’ defense is going to have to find a way to defend the deep ball without getting burned or committing penalties. But this didn’t end up mattering in the result because late in the game, any time Georgia State needed the offense to come through with a scoring drive, they did. The Red Wolves cut it to a three-point game at 38-35 with 10:30 left in the game – Georgia State answered with a touchdown. Arkansas State followed this up with a field goal to make it a seven-point deficit – Georgia State ran it down the field to make it 52-38 with just over two minutes to go, effectively putting the game on ice.

By the end of the game, Georgia State had run 99 offensive plays to Arkansas State’s 56, holding possession for 39 minutes, 19 seconds. The Red Wolves defense came into the game hobbled with injuries and had to go against a Georgia State offense which was firing on all cylinders for two-thirds of the game. You’re just simply not going to have success as a defense when you’re asked to stay on the field that long, especially when your front seven is as decimated as Arkansas State’s was.

All the glowing positives aside, Saturday is gone. The team is above .500 again and the offense put together its best game in program history, but Arkansas State’s defense was – to put it nicely – not heralded coming into the game. The Panthers aren’t going to move the needle in many onlookers’ eyes for beating up on that defense, even for as impressive as they looked doing it. Their next opponent, Coastal Carolina, has one of the best defenses in the Sun Belt – so if the Panthers have a field day against the Chanticleers, those eyes will be wide open and questions about how good this team can be will begin in earnest. 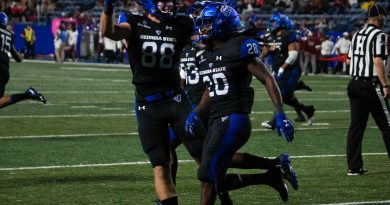 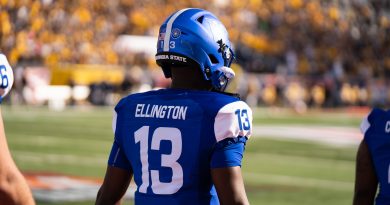