Fresh off a late October bye week, the Georgia State Panthers (6-2, 3-1 in Sun Belt) head west to take on the ULM Warhawks (3-5, 2-2 in Sun Belt) at Malone Stadium in Monroe, Louisiana. The Panthers have not seen the field since they defeated Troy 52-33 at Georgia State Stadium two weeks ago, while the Warhawks look to bounce back after dropping their last contest at home to Arkansas State, 48-41. A Georgia State win would put them in at least a two-way tie for first place with Appalachian State in the Sun Belt East.

The Warhawks offense is led by senior quarterback Caleb Evans, whose offensive profile mirrors that of Georgia State quarterback Dan Ellington. Evans is a dual-threat quarterback, and is right behind Ellington in total offense for the Sun Belt (3rd place with 274.8 ypg). While not quite on the same pace as he was last year throwing the ball, Evans has remained a strong runner. It will be important for the Panther linebackers to be diligent when diagnosing plays. This will offer Zach Dixon and Jordan Veneziale their first look at a dynamic running quarterback since stepping in for injured ILB Ed Curney. Behind Evans is junior running back Josh Johnson, who is having a sterling year – currently second in the conference in rushing yards behind Georgia State’s Tra Barnett. Johnson averages 6.2 rushing yards per attempt this season and is a threat every time he touches the ball. The Warhawks like to employ Johnson on 1st and 2nd down so if the Panther defense is capable of getting ULM behind schedule, in long down-and-distances, it will bode well for them.

The biggest key offensively for the Panthers should be ball control. The Warhawks have given up points (38.6 per game) and yards (494.8 per game) aplenty but they have also amassed 15 turnovers on the season, including nine interceptions. While interceptions haven’t been a problem for the Panthers to this point, the Warhawks are elite at creating turnover opportunities. Ellington is going to have to keep the ball out of harm’s way. Junior cornerback Corey Straughter must be identified at all times when he is on the field, as he leads the team with five INTs. As for the rest of the defense, the Warhawks are susceptible to being run on, giving up 235 rushing yards per game through eight games. Of course, the run game is the strength of this Panther offense. So if Georgia State picks up where they left out running the ball against Troy and takes care of the football, it could get out of hand.

This will be a road test as well as a test of keeping the momentum going after a week off. From this point on, every game is must-win for Georgia State to achieve their goal of winning the Sun Belt East title, so this is not a game that the Panthers can afford to take lightly. Kickoff is at 5pm EST. 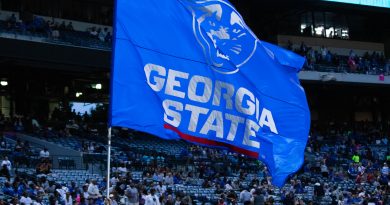 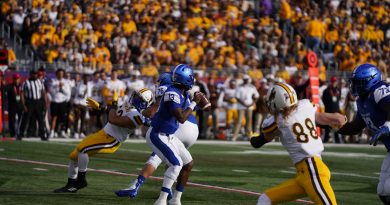