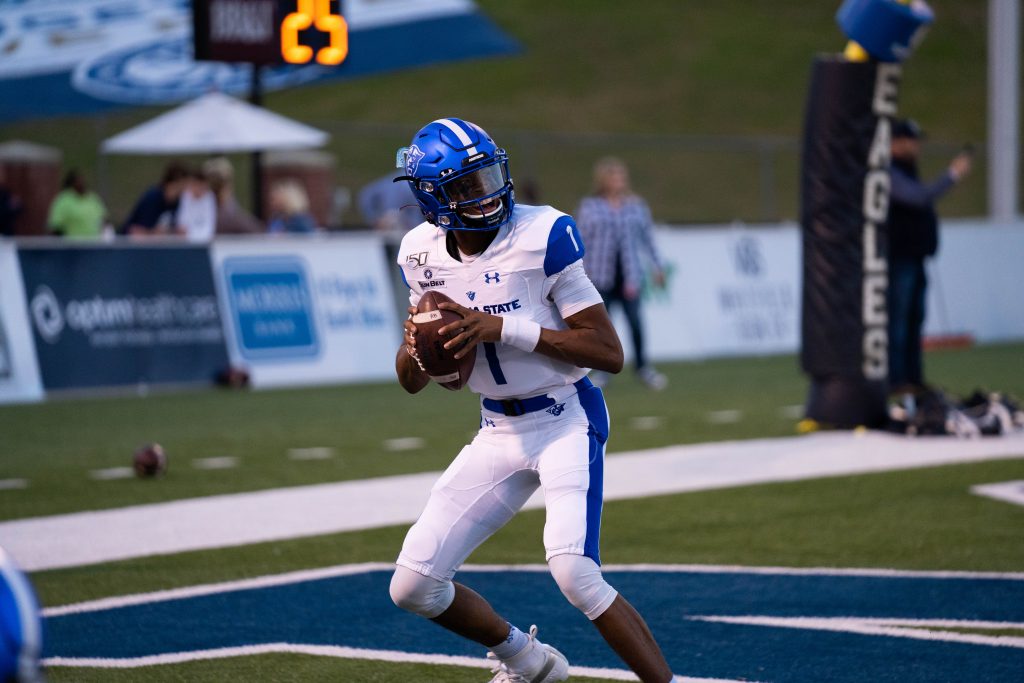 QB Cornelious “Quad” Brown IV warms up prior to the 2019 contest at Georgia Southern. The redshirt Freshman will make his first career start for the Panthers against Louisiana this weekend. Photo credit: Jordan Crawford for THERSdayNight.com

After going through what has to rank as the strangest and most difficult nine months in many of our lifetimes, a familiar feeling is here for Panther Nation: that nervous anticipation at the start of a new college football season. This leaves us preparing for this Saturday at noon, when Georgia State will simultaneously kick off their 2020 season and their Sun Belt conference slate in the newly-christened Center Parc Stadium against the nationally-ranked Ragin’ Cajuns of Louisiana.

In the Cajuns, a team fresh off a 17-point upset win on the road win at Big 12 stalwart Iowa State, the Panthers host possibly their toughest home matchup in their first home game of the year. In addition to claiming a power-conference win in their 2020 opener, Louisiana has improved year after year under Billy Napier. This culminated in a 11-3 campaign in 2019 in which they won the Sun Belt West. The next step for the Cajuns is an outright conference title. Having lost to App State in the Sun Belt championship game both times it’s been played, there is no doubt that they will be just as eager as Georgia State to start conference play with a win.

Far from having to rest on the laurels of their 2019 success, Louisiana was the consensus pick to repeat as Sun Belt West champ for the third year running this season thanks to their roster of proven veteran players returning this year. Senior quarterback Levi Lewis is back for one last ride after a season in which he threw for over 3,000 yards and had just 4 interceptions to his 28 passing TDs. 1,000-yard rusher Elijah Mitchell is back to wreak havoc on Sun Belt defenses, as is his partner-in-crime in the backfield, Trey Ragas, who himself notched a modest 820 rushing yards and 11 scores. Running the football is very much an identity of this Louisiana offense which averaged over 250 yards a game on the ground last season. They’ll be looking to improve on the 118 rushing yards they tallied in last week’s win over Iowa State.

On defense, the Cajuns lost their leading tackler from a season ago, linebacker Jacques Boudreax. Defensive coordinator Ron Roberts also left this past offseason to take the DC job at Baylor, but the Cajuns feel as if they’re in good hands with new DC Patrick Toney. Louisiana held Iowa State, who averaged over 32 points a game just a season ago, to just 14 points in their Week 1 win and pitched a shutout in the second half. On the flip side, they gain back a key part of their defense that was missing in last week’s win in Zi’Yon Hill, a Second Team All-Sun Belt Preseason pick and projected starter on the defensive line. 2019 All-Sun Belt Second Team honoree Joe Dillon will be coming off the edge and looking to match or exceed his 8-sack total from 2019.

Georgia State has a real challenge on their hands for their season opener and the key to success will be to do what worked well all throughout 2019. Redshirt freshman Quad Brown won the battle to replace Dan Ellington at quarterback so this will be the first look at what the offense will look like with Brown under center. Offensive coordinator Brad Glenn will surely rely heavily on the four returning offensive linemen and the depth that comes back at running back pick up where the offense left off after averaging north of 241 yards on the ground in 2019. Even against a stout defense, if the Panthers can get into a rhythm running the ball, they will take the pressure off Quad and allow him to pick and choose the times he cuts it loose in the passing game. If the offense is constantly in 2nd-and-long and 3rd-and-long and he’s staring at 30 to 40 pass attempts, it might be a long afternoon for Georgia State.

On the defensive end, the Panthers will have to know that the Cajuns have the same exact plan and that they will want to establish the run with Mitchell and Ragas early and often. But in preparing for that, they can’t lose sight of the passing prowess of the senior Lewis. He doesn’t put the ball in harm’s way but that doesn’t by any stretch mean he’s conservative back in the pocket. He only managed 154 passing yards in last week’s game in Ames but 78 of those yards came on one touchdown pass to sophomore WR Peter LeBlanc. In addition to making sure the talented running backs of the Cajuns don’t slice and dice to success, Nate Fuqua’s defense is going to have to avoid giving up the big plays that have haunted them the last two seasons. The same goes for the special teams units, as Louisiana busted off two touchdown returns on Iowa State kicks last week.

Hope springs eternal at the start of the season every year, but Georgia State can’t get caught up in the moment – their opponent is just too good. If the Panthers can avoid hurting themselves with turnovers on offense and assignment lapses on defense and special teams, an effective running attack shortening the number of possessions and keeping the Louisiana offense on the sideline is the blueprint to a season-opening win for the third straight time and a first-ever victory over a top 25 team. But if the offense can’t keep the form they had last season and the defense fall into old bad habits, the Cajuns are ranked for a reason and they will make Georgia State pay.

Brady Weiler has 57 posts and counting. See all posts by Brady Weiler 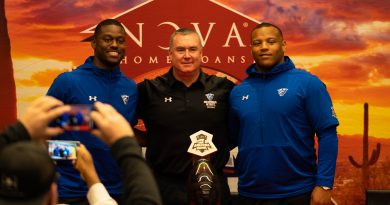 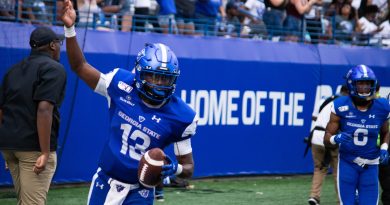